Logo designing is considered to be a very intricate process, but graphic designers nowadays know how to make it fun and exciting. The great thing about logo designing is that you are able to fully showcase your creativity to make your logo appear more unique and attractive to your target audiences.

Surprisingly, one type of illustration that has been widely used in logo designs is that of a lighthouse. When we think of a lighthouse, we usually think of old movies, ships, shipyards, and lamps. It is quite understandable why lighthouses are linked to such elements.

While they may not be as heavily used as they were back in the day, lighthouses were originally invented to emit light to help ships navigate. Now, thanks to better technology, they have become pretty redundant. However, you will still find them in the world of logos.

Although lighthouse businesses aren’t really a thing, a large variety of companies actually use lighthouses in their logos. It may not make sense to some people, but if you think about it, you will most likely start understanding why lighthouses are so popular among modern logo designs.

With that being said, go back to the basics and think about the sole purpose of lighthouses. Yes, you got it right. They are used to guide ships. This is exactly what businesses are trying to achieve by introducing lighthouses in their logo design. The purpose is to visually communicate to you that their company is capable of guiding you!

If you’re now wondering how exactly lighthouses can be incorporated into logo designs, look no further. We have gathered some of the best lighthouse logo examples that you can use for inspiration!

Ready to get some cool ideas for your next logo design project? Let’s get started. 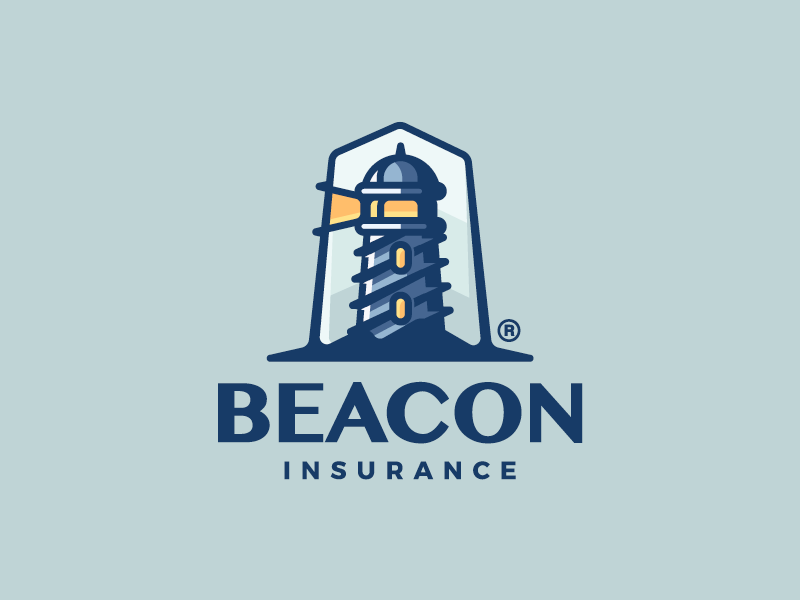 This lighthouse logo is simple yet effective. It markets an insurance company, Beacon Insurance, in a way that doesn’t go too much over the top.

The image goes in sync with the name of the company. Plus, the logo makes a lot of sense because it is likely that most people are looking for a ray of hope whenever they are in financial trouble. Through this logo, this company is transmitting a message that it wants to be that hope for consumers by offering insurance plans.

The designer who created this logo has used only two colors within the design – blue and yellow. While blue serves as the background and outline of the lighthouse image, yellow is there to highlight to light within the lighthouse.

This is another great idea of how you may incorporate lighthouse images into a logo design. Unlike the previous one we’ve shown, the designer here has only used the color blue.

However, if you take a closer look, you’ll see that the bottom part of the logo is designed to mimic the shape of waves, which clearly links the logo to the name of the business– Wave Light.

While we can’t be sure what it sells, the logo is quite effective in making an impact. 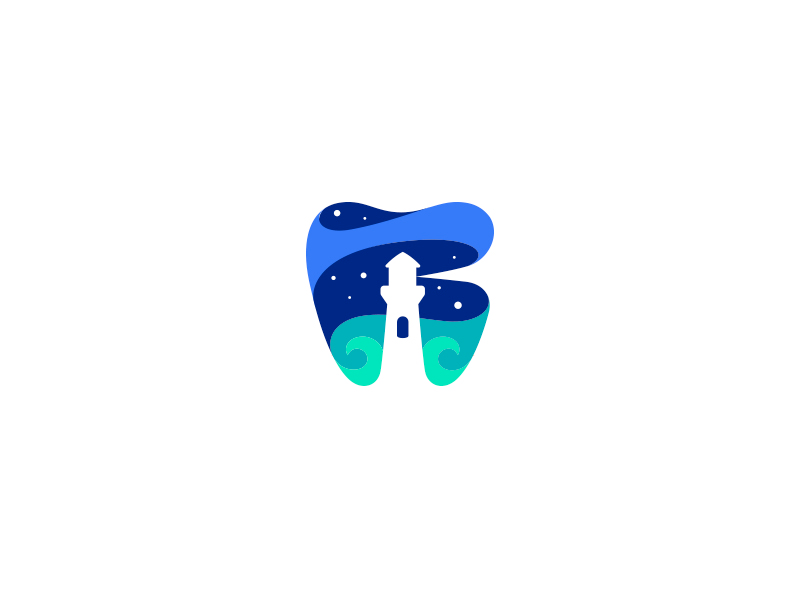 Do not worry if you are a fan of colorful logos. While simplistic logos tend to turn out as great designs, there really is no need for you to just stick to one or two colors when designing a lighthouse logo. As seen in the above example, there are ways in which you can showcase your creativity and imagination.

The designer here has used multiple shades of blue and green side by side to create this stunning logo. The entire shape comes into perfect form with the help of white space that makes up the outline of the lighthouse, allowing the logo to elicit a very modern and chic feel to it.

However, in contrast to the previous logo designs, the graphic designer has not mentioned the name of the business in this logo. While we prefer that you create a logo that includes the name – or initials – of your brand for easy understanding, some businesses still prefer to skip the text in the logo, and that is also completely fine! 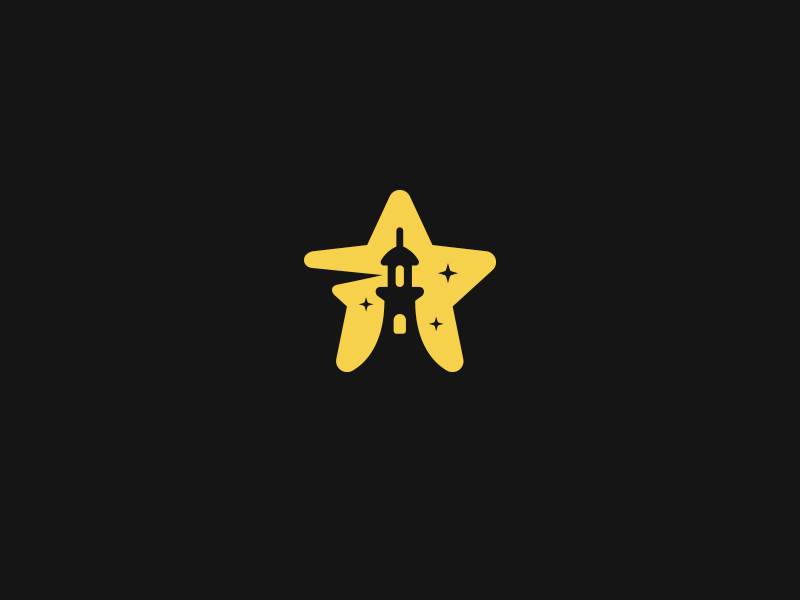 Very few logos know how to effectively make use of negative space, especially when it comes to one that uses the color black as a background like this one. Interestingly, this is one of the major benefits of choosing lighthouse logos.

Since you need to equally show darkness to go hand-in-hand with the light beaming from the lighthouse, you may also consider using black space instead of the usual white space we typically see in most logos.

The designer has formed a star by using the color yellow which illustrates light. You can take inspiration from this design and use the color yellow to form any shape including waves, stars, the sun, and the moon. Since yellow is a color that symbolizes happiness, positivity, and enlightenment, it is a great color choice to use in lighthouse logos. 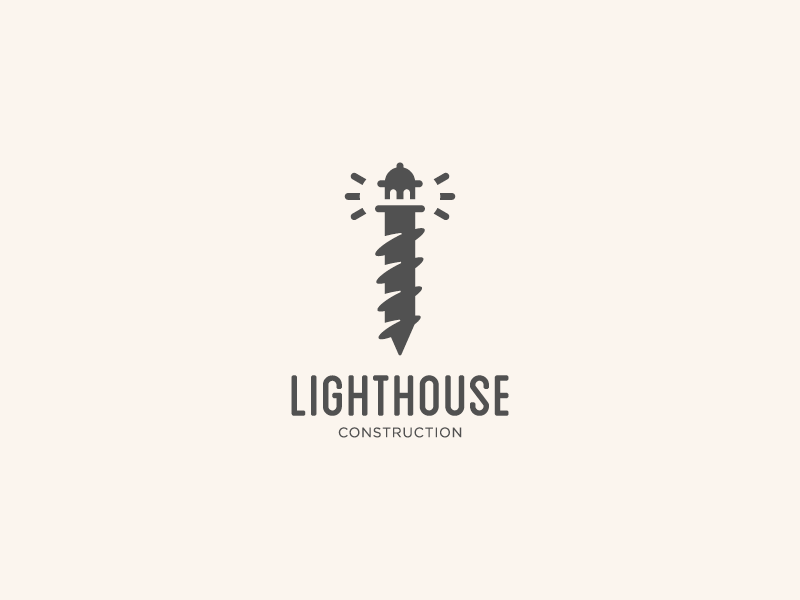 This creative logo is unique because of its shape. The lighthouse here is more than just a lighthouse – it’s also a screw. Since the logo belongs to a construction firm, the designer has given the image a slight twist in order to connect it with the niche of the business. This is one of the coolest things about a lighthouse, you can play around with various shapes and images to design it in different ways. 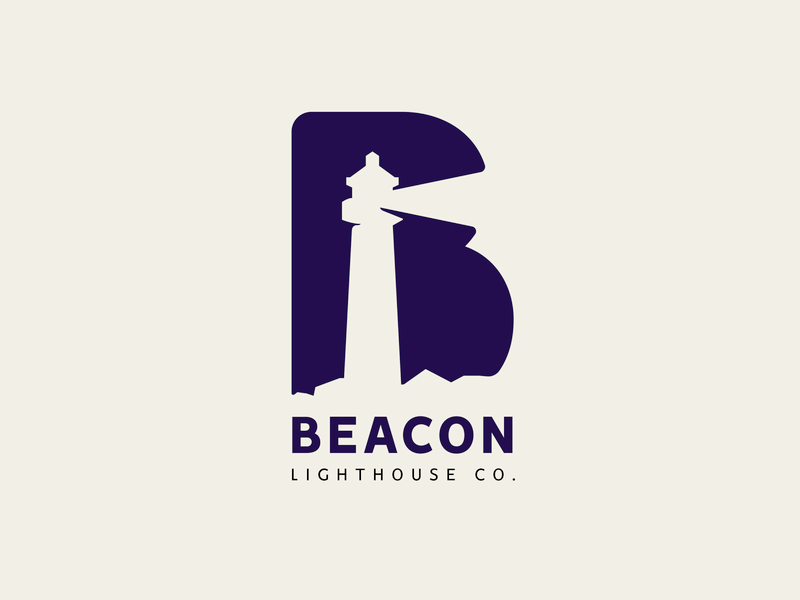 This is a classic example of lighthouse logos. The designer has used negative space to design not only the lighthouse but also the light that shines from it. He has also very cleverly incorporated the B in the logo which stands for Beacon, the name of the business.

Thanks to the various logo services there are online, it is no longer as hard to get your company a lighthouse logo as you may think. There are many websites with ready to use logo templates online. All you have to do is provide details on the required text and other design elements, such as the style, color scheme, and font type.

However, if you want something more professional, and this is highly recommended, then you will have to get in contact with an experienced graphic designer who knows the ins and outs of logo designs.

At DesignBro, we have professional graphic designers on our team who are highly experienced with designing logos. Feel free to reach out to us here to find out more about how we can help you design the best logo for your business.

Learning with Minecraft Logo: What Should a Gaming Logo Look...